Caffeine and Migraine: To avoid or not to avoid?

There is no single answer when it comes to explaining the link between caffeine and migraine. This is because caffeine is regarded as both a trigger of and and a treatment for attacks. 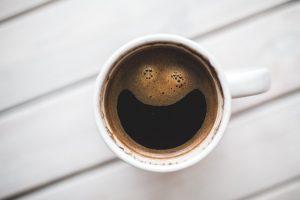 There is no single answer when it comes to explaining the link between caffeine and migraine. This is because caffeine is regarded as both a trigger of and and a treatment for attacks. We can say with some certainty, therefore, that caffeine does have an effect on pain. However, whether this effect is positive or negative varies from person to person. As with most triggers, finding out whether caffeine helps or causes your migraine attacks involves paying close attention to how much of it you have on a daily basis, when you have it, and how this correlates with the timings and frequency of your attacks.

Paying attention to our caffeine intake is particularly important because most of us have it on a daily basis. Even if you aren’t an enthusiastic coffee or tea drinker, you are likely to be eating or drinking a number of other things with caffeine in them. Chocolate, energy drinks, and soft drinks, for example, all contain caffeine. In fact, a number of medicines prescribed to help treat migraine also have caffeine in them. But this leaves us with the question: To avoid caffeine, or not to avoid caffeine?

We have already mentioned that caffeine can be used in pain-relief medication. This is because it acts on our blood vessels. Before a migraine attack sets in, the blood vessels tend to enlarge and increase blood flow to the head. Caffeine, however, works against this by causing blood vessels to narrow (in a process called vasoconstriction) which reduces blood flow to the head. This means that caffeine can reduce the head pain experienced during a migraine attack. If you feel an attack is approaching, having a cup of tea or coffee may help to prevent the pain from becoming as intense as usual.

That being said, you shouldn’t rely entirely on caffeine to treat migraine. This is because overuse can make your migraine attacks worse. Too much caffeine causes your body to become dependent on it which has a number of side effects including nervousness and poor sleep. Furthermore, suddenly avoiding caffeine after overuse can cause caffeine rebound. This is when your body experiences withdrawal from the caffeine, the effects of which include rebound headaches sometimes more intense than the pain experienced during a migraine attack.

The bottom line on caffeine and migraine

Whilst caffeine can be useful in occasionally reducing the pain of a migraine attack, it is best to avoid having it too often. As with most things, caffeine is best in moderation. Pay attention to how it effects you personally, and make appropriate changes (be that introducing the occasional cup of coffee, limiting the number of energy drinks you have, or avoiding caffeine altogether) to help you manage your condition. A general tip from migraine experts: if regularly consume caffeine, stick to this regularity and do not suddenly consume a lot less or a lot more.

Caffeine as Trigger and Treatment of Migraines

The Link Between Caffeine and Headaches

National Headache Foundation on Does Caffeine Trigger or Treat Headaches?

Migraine Stress Relief: The Impact of Stress and its Management (1/2)

Stress is difficult to define. It is also something most people will experience at some time in their lives. Migraine and stress are closely related, so it is important that we know how to get relief when we need it.

We would love to congratulate Happyr Health, the winner of CUE’s 2k competition in the Software Category! Founded by Cornelius Palm and Nicola Filzmoser, Happyr

Migraine insights in your inbox!

Get all latest blogs and news for a Happyr life with migraine.