Migraine is not just a headache. Migraine is a severe neurological disease. This sounds complex, and it is, as the impact, symptoms and comorbidities (such as anxiety) can vary greatly from person to person. 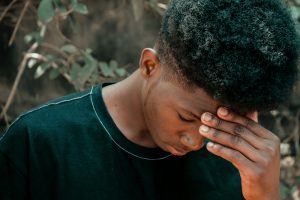 It is not just a headache

Migraine is not just a headache. A migraine attack is much stronger than an ordinary headache and is usually accompanied by other symptoms (1–3).

A migraine attack often manifests itself as a pulsating, throbbing headache (1,2). The pain occurs mainly in the area of the forehead, temples and eyes and is often accompanied by other symptoms such as nausea (1,2). Usually, the headache is one-sided. The severity of the pain can increase under stress or during physical activity (1,2).

As many people know, migraine attacks are typically characterised by moderate to severe headaches, often on one side of the head (1,2,18). People with migraine usually experience them as pulsating, throbbing, stabbing or pounding (1,2,18). The headache often intensifies with physical activity, sometimes even with small movements (1,2,19). A bright, busy or loud environment can also make the headache and other symptoms worse because some people are sensitive to light and noise during attacks (1,2). The headache may be associated with nausea and vomiting (1,2,18). Yet, headache symptoms can also be absent in some young people, and still, it is a migraine attack. Then the young people are usually mainly nauseous, vomiting, and dizzy. This type of migraine attack is called abdominal migraine (20,21). The symptoms of a migraine attack can last between four hours and three days. In children, migraine attacks are often shorter, between two hours and two days (1,2).

Before the actual migraine attack becomes noticeable or during the migraine attack, some people see flashes of light and shapes (1). An aura can take many forms and may last 5 to 60 minutes (1,2). Science has discovered about 25 different symptoms to date that are related to migraine aura alone (22). For example, many patients perceive their vision as blurred, shaky or through wavy views (1,2,22). Particularly distressing may be temporary speech disturbances, paralysis or tingling. An aura usually subsides within an hour without any consequences and is then replaced by the typical migraine symptoms. For some people, only the aura symptoms occur. These headache-free migraine attacks are called “migraine aura without headache” (23). About 1 in 3 people with migraine have temporary warning symptoms, known as aura, before a migraine (1,2).

For many people with migraine, the migraine attacks occur in up to four phases (1,2,23–26). Like many migraine symptoms, these stages are individual to each person and describe the patients’ states before, during and after the migraine attack.

The pre-warning period of a migraine attack can last from several hours to days (24–28). People with migraine or those around them often notice changes in mood, behaviour and appetite, and energy levels may also be affected (24–28).

The prodrome phase may begin with increased yawning, a decrease in concentration and difficulty holding conversations (27,28). Moodiness or irritability is often part of the picture (25–28). Physically, tension can lead to muscle stiffness, despite tiredness it is difficult to get to sleep in the prodrome phase and the first signs of nausea can set in (25–28).

This phase is the optimal time to soften the severity of the migraine attack or even prevent it (24–28). People with migraine or who care for them often develop a feeling, based on experience, for which medications or activities, such as mindfulness and relaxation exercises or fresh air, have the best effect (25–28).

For people with migraine who experience an aura, it usually follows the prodrome phase (1,2). During the 5-60 minutes, patients usually experience visual problems such as flashes of light or blind spots (see above) (1,2,22).

The headache phase is what many people understand as the actual migraine (attack) (1,2,24). It is characterised by an (often) one-sided headache and usually lasts for several hours to days (1,2,24). Just as the duration can vary from person to person and from headache phase to headache phase, the intensity of the headache also varies (24). For example, some people with migraine may be able to go about their daily lives, although impaired. Other people may be paralysed by the pain and intensity of the migraine. In addition to the pain, other symptoms such as nausea, sleep disturbances, anxiety, and sensitivity to sounds, light and smells often occur during the headache phase (1,2).

The headache phase can be very intense and exhausting (1,2,24). In 80% of people with migraine, this is followed by the postdrome phase, which can feel like a “migraine hangover” (29,31). Postdrome symptoms include fatigue, body aches, difficulty concentrating, dizziness and sensitivity to light (1,2,24,29,31) . Some migraine patients report that the postdrome can be just as distressing as the headache phase (29,31). For some people, relief can come from relaxing activities such as meditation or yoga, drinking plenty of water and consciously avoiding stress (29).

Why are the phases of migraine important?

Firstly, it shows us again how multifaceted and complex migraine is (1–3). As migraine patients, but also as humans who meet migraine patients, it is important to understand that a migraine is much more than the headache phase. And that an attack can last up to six days in different stages. Understanding the individual migraine stages is necessary to find the right treatment option and use it at the right time (1,2,31).

Unfortunately, the majority of migraine patients, young and old, still suffer in silence and uncertainty (32–34). Only a few are diagnosed, which is vital for therapy and improving quality of life (33,34). Keeping a headache diary can help people with migraine to recognise and understand their symptoms and the phases before and after the headache, and to plan and implement the right treatment (24–26,35–39).

Pages: Page 1, Page 2
PrevPreviousThe ‘Migraine Brain’: What happens when I have a migraine attack
NextMigraine and chronic pain: when it hurts again and againNext 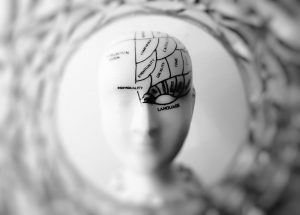 The ‘Migraine Brain’: What happens when I have a migraine attack

What is migraine? And what happens in my brain when I have a migraine attack? The ‘Migraine Brain’ gives some explanation on how people with migraine experience stimuli. 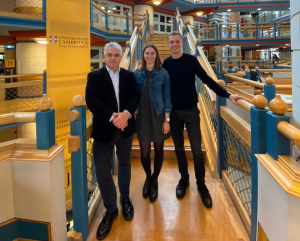 We would love to congratulate Happyr Health, the winner of CUE’s 2k competition in the Software Category! Founded by Cornelius Palm and Nicola Filzmoser, Happyr

Migraine insights in your inbox!

Get all latest blogs and news for a Happyr life with migraine.